My mind is still blown to tiny little pieces. A while ago I saw an advert for a vCHS Cloud Engineer based in London and I thought “there’s no way I could work at VMware, those guys are like crazy smart geniuses from the future”. Or something.

Anyway, I read the spec. And then I had a series of mild palpitations. And then I read the spec again. It turns out I could do this job and whilst my brain was still trying to process all of this my hands took over and somehow submitted my CV. It seems that the vNerd planets were aligned that day because as of November 4th I will be an employee of VMware. I’ve never wanted to work for somewhere as much as I have VMware and if you’re reading this then I don’t need to tell you why.

I’m very proud to say that I’ll be a member of the vCHS team and I am very much looking forward to being part of something that is changing the way we look at the cloud and ITaaS.

Which is a bit mad! See you in the future.

There’s some interesting bits coming out of VMworld Barcelona at the moment regarding the new VMware vCloud Hybrid Service. I’m a huge advocate of all things VMware but this particular service has me really excited as it’s something that just makes sense. If you’re already a VMware vSphere customer and you’re looking to expand, streamline or consolidate then this service really is a no-brainer. Hands down, this is the new IT-as-a-Service.

Remember P2V? Well say hello to V2C. Using the vCloud Connector you send your existing workloads up into the vCHS service into an already existing cloud node. 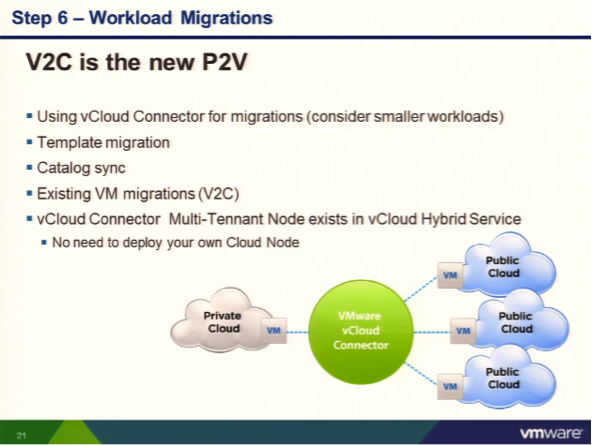 It really is that easy. As an example in my current employment we have a DR site. It’s basically a mish-mash of hardware that’s been swapped out with newer kit at our main site. Your DR site deserves the same level of attention as the main site. Except in our case it hasn’t had that same level and it’s now time to consider upgrading so that it can keep up with the required load. Our main site has in the region of 120+ VMs running on 8 hosts and our DR plan stipulates that we need to have in the region of 50 – 60 VMs of all shapes and sizes to keep the business running. Currently our DR site has 1 host of the same spec as the hosts at the main site. You don’t need to be a virtualisation expert to work out that if we bring up those VMs and allow the required number of staff to login then the load is going to go through the roof.

So instead of throwing money at upgrading the DR infrastructure, why not send it off to a vCHS solution? Let vCHS take the load. It’ll be manned by qualified VMware staff so we know it’ll be looked after and it’s one less thing for us to worry about.

This of course is just one simplified scenario and it’s one of many but it’s something that just makes sense. 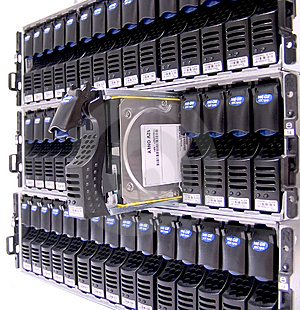 VMware announced VSAN yesterday at VMworld 2013 and this is exactly the kind of thing that is going to help businesses who are looking to replace or upgrade their storage with something a little more up to date. We are just that kind of business. Currently we’re running a Fujitsu DX90 S1 with absolutely no advanced features available whatsoever.

To give you some idea of how archaic this thing is I recently had to re-provision datastores after it was decided that the current mixture of datastore sizes just wasn’t cutting it. We had a mixture of 800GB, 1.2 and 1.6TB with RAID 5 and 1+0 storage and the goal was to increase these to RAID 6 2TB. The block sizes weren’t that much of a problem since 5.x doesn’t care what size they are but I had upgraded us from 4.x to 5.1 since starting work here and best practice is to blow the storage away and re-provision.

All in all the entire project took 10 days to complete if you factor in disruption and troubleshooting.

Now, it could be argued that we have suitable storage. Our VMs have somewhere to sit and it’s all shared across the hosts and everything can see everything else. But we have no features and maintenance is taking days rather than hours or minutes. We’re currently in the market for a new SAN and we’ve been shown demos from EMC, IBM and NetApp. The storage provisioning, DR and VMware integration is light years ahead of what we have (or not as the case may be) and obviously we’re going to be walking away from these things very impressed.

This is where VSAN can swoop in and save the day. We’re in the middle of a tech refresh and we’re replacing our Sun servers (don’t ask) with Dell R710 and 720 rack mounted servers and we’ve bought these things with minimal disk configurations, 2 drives for the hypervisor. What VSAN means to us is we can now fill those servers up with SSDs and HDDs for a fraction of the price of one of those other SAN vendors.

VSAN also does away with RAID and instead employs something called RAIN – Redundant Array of Independent Nodes (a node being a host). Redundancy and protection requires 3 hosts in the cluster and VM protection comes by way of replicas where the data is written to multiple nodes in the VSAN cluster. Protection was one of the questions I asked myself when I first read the announcement and Duncan Epping (as ever) has a plain English explanation and a high level illustration over on Yellow Bricks.

As for the the disk configuration you’ll need at least one SSD per server for write-through cache and this SSD does not contribute to the overall capacity – which isn’t much of a show stopper if you’ve got a 24 bay R720XD only utilizing 2 disks for the hypervisor install. And much like tiering, data is written to the SSD first then sent on to the HDDs. Reads from the VSAN are read via the the SSD, or from the HDD if the data isn’t available on the SSD.

This is pretty much a no brainer for us. Instead of throwing in excess of £60K on a physical SAN we can now instead buy a bunch of 900GB 15k drives and combine them into a VSAN. A tenth of the price at best.

And you’ll be even more impressed by the fact that VSAN is baked into vSphere 5.5 – no appliance required.

I’m in the process of merging datastores at the moment as we seem to be generating some mammoth sized VMs and we’re fast approaching capacity. Amongst other servers our Exchange box is approaching 1TB and we have various other platforms requiring some large amounts of space. Bearing in mind we need to keep some free space to ensure servers don’t actually stop running and we also need space for things like snapshots and backups, it’s got to the point where something has to be done.

I know that it’s not just a case of right clicking and unmounting datastores as that runs a high risk of causing APD. We’ve experienced APD not so long ago and that’s not something I wanted to go through again so I needed some instructions on how to do it cleanly and how to avoid a nightmare scenario.

Thankfully I came across this excellent guide on how to achieve just that written by Jerry Wilkin. And be sure to bookmark this blog as there’s some other handy tutorials and articles you might find useful (especially if you’re into guitars).